This year in november, there was a nice surprise.
My image of the hall of the central library in Utrecht was chosen as the winner in the Holga week 2022 contest. It was (of course) in the Holga Pinhole category.

The image was taken with the Holga WPC, which takes pinhole images on 120 film, in the grand 6X12 format. It has a very wide angle of view, so it takes in a lot of environment. This image was a selfie, as I am in the frame pretending to play ches for about half of the 3 minutes exposure time.

If you are interested: here’s the link to the youtube awards presentation. There are a lot of other great Holga shot mentioned and shown. My entry is at about minute 38 🙂

In the past two years we had a worldwide pandemic. And now we are more or less out of it. Although I have been doing pinhole photography, it wasn’t as much as before. And somehow posting new entries didn’t have priority. No worries, plenty of ideas for new projects. In the meantime, here is a random selection of the past two years 🙂

Click for a larger image. As the bottom pictures show, I have modified a SprocketRocket camera into pinhole. Worth some experimenting.

Before we had computer models, the only way to study the movement of water was to build scale models. This was done in the Netherlands in the newly created Noordoostpolder area (“polders”: creating land out of sea) with enough space to create large scale models of harbors, ports, rivers etcetera. After the mid 1990’s computers could be used, and this “open air laboratory” became useless. It was left for nature to do what nature does: grow over the man-made objects.
Currently is has been converted into a forest park, with walking routes that wander through these models. When you take the route, you stumble upon water streams, locks, small “waterfalls”, big installations t0 create waves, and so on.

This is heaven for pinhole photographers 🙂
Below a few images of my first visits to the waterloopbos, I will return , I’m sure !

Again, way too long between new content, apologies!
Here is some “new”  work, made last year on a holiday trip to Rügen.
This small island at the Baltic sea holds a lot to appreciate: beautiful coast line with high chalk cliffs, old-fashioned seaside resorts with beach chairs, elegant architecture and some spectacular piers, and more. It also holds one of the largest structures built by the nazis (Prora), and also some wonderful concrete shell structures that were designed by Ulrich Muther in  the DDR era. So a lot to wander around and see, both for ourselves as for the pinholes cameras 🙂
Below are some of the things that I captured, with various pinhole cameras, mainly the RSS66, the 8Banners MB, and the Vermeer anamorphic camera.

First some shots of the shell structures and (seaside) architecture: 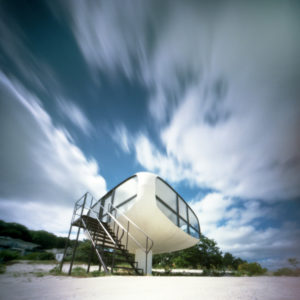 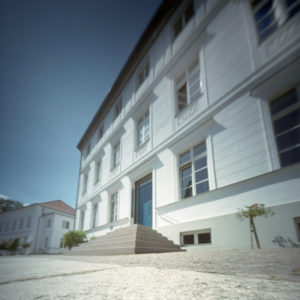 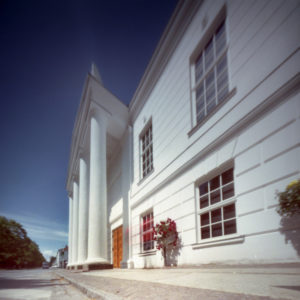 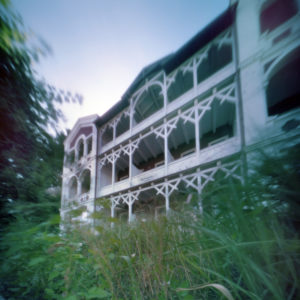 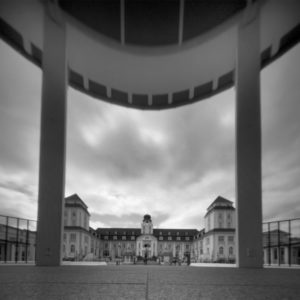 And some random shots of one of the harbour towns and the seaside: 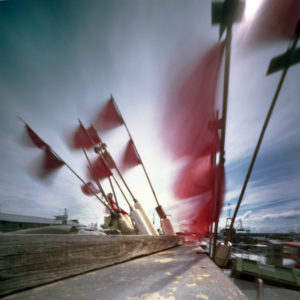 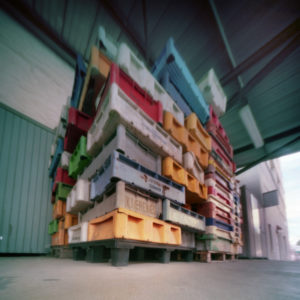 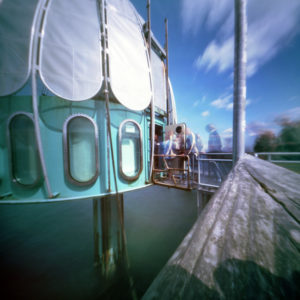 Finally, a picture made in the cafetaria at Prora. An eerie place with a dark history, which (to my amazement) is now converted into seaside apartments that are for sale.

I need to catch up on my blog entries, so here are some thoughts and pictures from our trip to Berlin at the end of april 2019…

Of course when you visit a city like Berlin for the first time, you go and see all the usual highlights. And so do a lot (a lot!) of other tourists. It’s hard to avoid the people that are all over the place, at Brandenburger Tor, Unter den Linden, etcetera. With the long pinhole exposures you can try to “empty” the city, but as we had nice sunny weather (and I carried ISO400 film), I decided to use the people and try to get some tourist in the frame in the ghostly pinhole way.
Because after all: when the people are there, it’s better to make use of them than trying to avoid.
I took along the RSS66, with the intention of using both the center and the upper pinhole. For big buildings the rise possibility is very convenient. This worked out fine, but at some moments I had a little trouble opening and closing the right shutter. Excited by the image that I visualised, I forgot which shutter to open (or sometimes which one to close) 🙂

Some spots (like checkpoint charlie) we visited very briefly, these are way to crowded and commercialized to be interesting. But at a site like Bernauer strasse, which is very impressive, the atmosphere was much more quiet and genuine.

Here are some shots I made during the few days we wandered around Berlin.
The bottom two pictures were taken at the Hackesche Höfe, which is a nice quiet spot in the middle of a busy city! 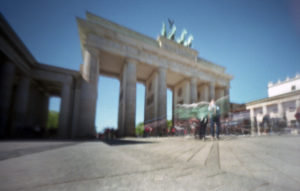 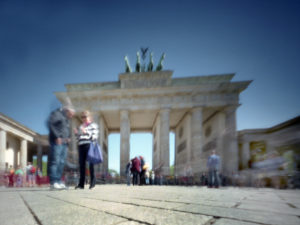 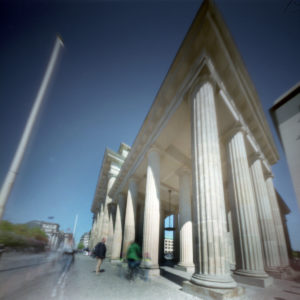 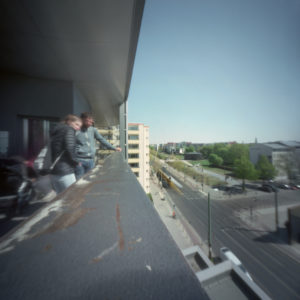 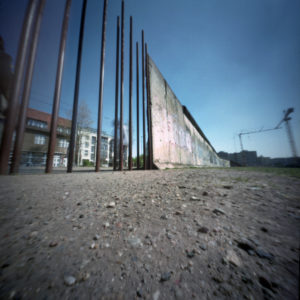 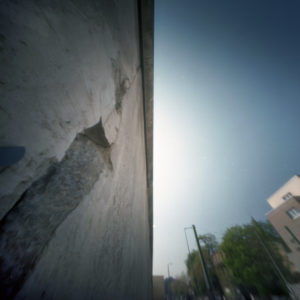 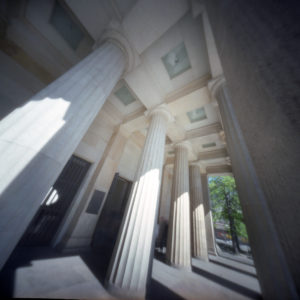 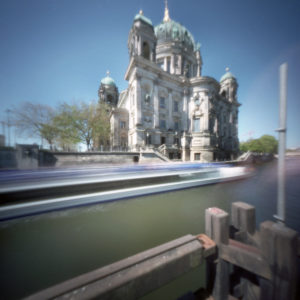 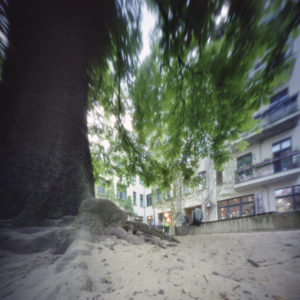 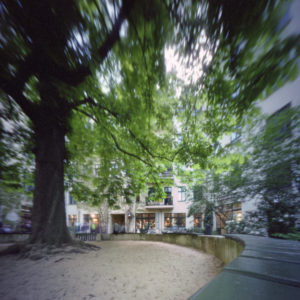 For about 4 years now I have been working with anamorph pinhole cameras.
And slowly it gets more familiar, pointing the camera NOT at what you want to be in the frame. You have to aim beside, above, or below the subject, depending on the vertical or horizontal positioning of the camera. But then again, vertical and horizontal are very relative words with regards to anamorph 🙂  Here are some vertical anamorph shots
(click for a larger view):

And I have learned, that anamorph shots in landscape mode sometimes show the effect less “jumping at you”, and often these are the strongest images. Here a few examples:

But sometimes you get challenged to really go wild with anamorph, and look for the full distortion. Here are a few, notice my selfie shadow bottom right in the black&white image. This camera has a huge field of view (in a donut shape).

Finally a picture from the Isle of Sark, the small natural bridge called “la coupee”. This is an amazing place by itself, and the anamorph technique adds to it. After seeing the result, a phrase from JRR Tolien’s book jumped to my mind: “It’s a dangerous business, Frodo, going out your door. You step onto the road, and if you don’t keep your feet, there’s no knowing where you might be swept off to.”

Together with a few other NL pinhole photographers we did a walk in Antwerp. Assembly point was at a café near the entrance of the st.Anna tunnel, which is an old foot tunnel below the Schelde river. And what happens when you’re with a few pinholers in a café waiting for the rain to stop? Right, you get pinholed! 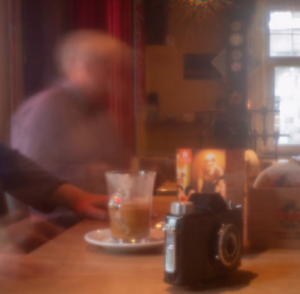 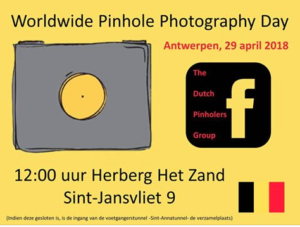 After we finished our coffee it was dry, and luckily it kept dry for the rest of the day. So we started our walk, and the first series of images was shot within the entrance building of the st.Anna tunnel, which holds old wooden escalators. Ofcourse we immediately stayed there for half our or so, to allow for the lengthy exposure times down in the hall below. Many people passed, some curious, some stoic as if they pass a group of guys with strange boxes on tripods every day.
I took some shots with my little FujiMX + the pinhole body cap that Todd Schlemmer has 3D printed for me. Again the collection of dust on the sensor prevented a real nice usable pinhole image. But it works great, digital pinhole 🙂 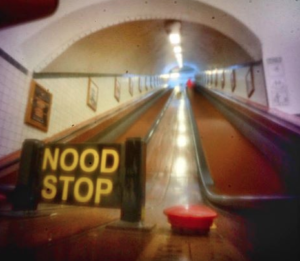 At the same time I placed the anamorph camera on the escalator side for a 20 min exposure. Here is the result of that attempt:

Then while the rest was still downstairs I went up and did the smae trick: placed a pinhole camera (the 8Banners Mb) at the top of the escalator.This picture with a 2 min exposure was used for the WPD gallery. Had to crop it to get a decent ratio with the 700px limitation of the WPD gallery. 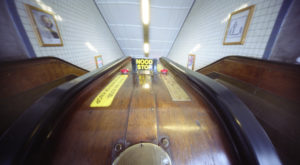 Then  we went on to walk along the schelde river, and on to the old fortress “het Steen”. The anamorph shots I took were taken on Lomo film, and somehow the colors went wrong, so I converted some of them to B&W.

Soon I discovered that this walk was different than a walk with my regular photoclub: instead of being left behind because of long exposures and slow method, I was ahead of the group all the time 🙂

We took a break and ate a classic frites met stoofvlees at a cafetaria, here’s mine in pinhole: 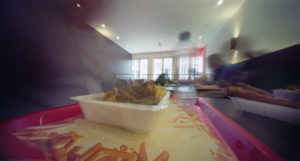 Then further walking over the market place, finishing up the last exposures, again a lot of looks from people passing by. After that we went to a small place called DOKA (short for darkroom in Dutch) which is a combination of café, gallery and shop for analogue photo supplies. Here we met with the photographer of the current exhibition, who created scenic images with maquettes (and he’s now building a pinhole camera). A nice extra treat.
Back to the car/trains and back home. A nice pinhole day in Antwerp! 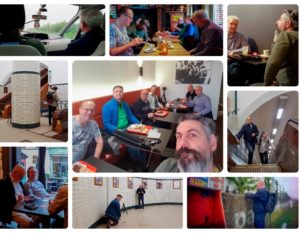 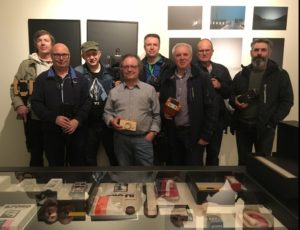 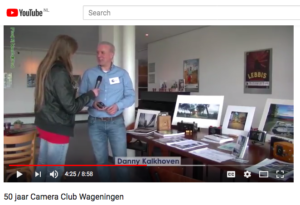 One day in Vienna

Recently I visited Vienna, the beautiful capitol of Austria, driving into town by car from Utrecht/NL. A nice 1200 km ride through Germany and Austria.
I did not have time for a touristic visit, as I was there to help someone move into an apartment.
But we did have some coffee during the day, ate in a restaurant, and when I drove home, some stops were needed to eat, drink and sleep.

I took a pinhole camera along; the trusty old eightbanners Mb in 6X12 mode, and some rolls of film, to take some shots during the stopovers and when in Vienna.
Here are  a few of these pinhole pictures, made during “one day in Vienna”.