Sometimes, when visiting forums like f295 (forum) or just googling for pinhole pictures, I stumbled on strange images that were made with an anamorph camera. Wow, what’s that? It sure produces beautiful crazy images, here’s one by Scott Speck:

Short explanation: a pinhole camera that holds the film rolled up as a tube, emulsion inside, and with the pinhole placed at the axis. And it doesn’t photograph where you point at. And it distorts the image, very, very much.

Usually when I tell this to the audience at a pinhole lecture, I get fuzzy looks, and most people don’t comprehend 🙂 I didn’t either, until after some more investigations.
And only after I bought such a thing, it became more clear. Yes,  this is one of my pinhole cameras that wasn’t home made.  Way to difficult for me.
There is someone in Poland who makes beautiful wooden pinhole camera’s, and sells them through Etsy (link: Etsy Vermeer).

So here is a picture of the camera, and how to load the beast: 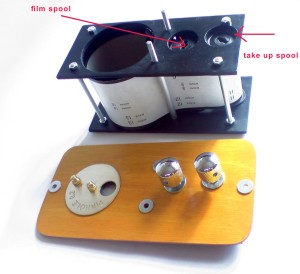 After loading, you have 4 (four!) exposures available. Talk about being selective what to shoot.. OK, load, and take it outside (or inside of course). But beware how to aim this camera! It has a kind of donut-like field of view, so if you point it at something, it will photograph the things around it. Here’s a more or less mathematical explanation of the phenomenon made by Matt which I found on internet (mathy): Matt

After some tries and test rolls, I now have a sort of control over the camera, and an idea on what will be in the picture. I have painted some guidelines on the box (sorry Cezary!) to help me position the camera.

And sometimes the quote “less is more”  applies: image with less prominent distortion seem to work better, although a crazy puzzle also is nice.
Here is a shot of the camera in front of a building, followed by the resulting image: 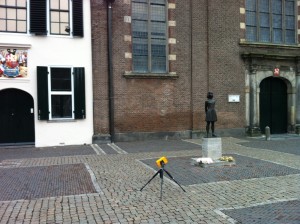 Now what to photograph with this anamorph technique? Just as with other pinhole cameras, I would say that everything is suitable…
But when discussing the images in my photo-club, we came upon the topic that this camera, with its typical way of distorting images, should be used to often. The danger of becoming a cheap trick is imminent… A good idea might be to take very well known or even iconic subjects, and distort them with anamorph.
And as I always listen to advice from my fellow photo-enthousiasts, I will do that.
Perhaps 🙂

This is what happens to a Dutch windmill, when approached with the anamorph: 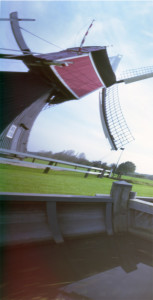 You can see more in the anamorph gallery: Anamorph Gallery

Thanks, for reading, and feel free to comment, Danny